I have recently found some shocking statistics from Statistics Canada. The actual link to this site is:https://www.google.ca/url?sa=t&rct=j&q=&esrc=s&source=web&cd=1&cad=rja&uact=8&ved=0CB0QFjAAahUKEwjItrP6hLnHAhWLNYgKHafEBaA&url=http%3A%2F%2Fwww.statcan.gc.ca%2Fpub%2F85-002-x%2F2013001%2Farticle%2F11804-eng.pdf&ei=1IDWVcj8J4vroASniZeACg&usg=AFQjCNE0ii1k6wG8WDNcc3U1ezAiKthVBw&sig2=e59ivaCK_XF7BmvpxuVohA

Before I show you two graphs from this report on statistics I have a friendly reminder. Please watch:

https://youtu.be/zQ1_IbFFbzA
Now I am not going to talk. I'll simply "let it pass your own test of reason" as a friend of mine likes to say. 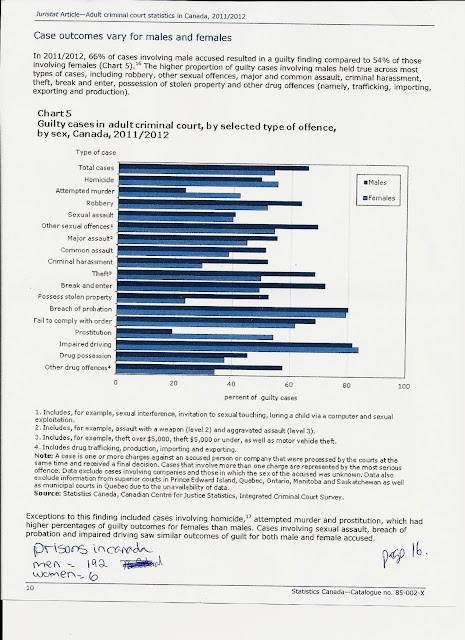 So this first graph states: "guilty cases in adult criminal court". Key word is GUILT. So why then according to their statistics that Women are just behind men in Murder, surpass men by nearly twice in attempting to murder someone? Yet there are only 6 prisons in Canada for women, 5 of those being "healing type lodges" and yet 192 full fledge prisons in Canada for men.
Additionally, Women fall just about 10 percent in robbery as well as "major assault". The most interesting stats are that women fall ever slightly behind men in CONVICTIONS for Sexual assault, about 17 percent behind men in "other sexual offences". Whom are they sexual assaulting? 200 pound men?, jumping out of bushes and raping men down? No they are molesting children!, the weak and defenceless. Yet don't be mistaken, we aren't talking about prostitution, that has a category all of its own and even though women surpass men in that category by nearly 3 times, they are only found guilty about 1 percent more than men and sentenced to some form of punitive punishment. Say the system isn't biased when in such a criminal offence perpetrated nearly three times more then men that men are going to Jail 1 percent less than women.
Feel free to scrutinize the rest. 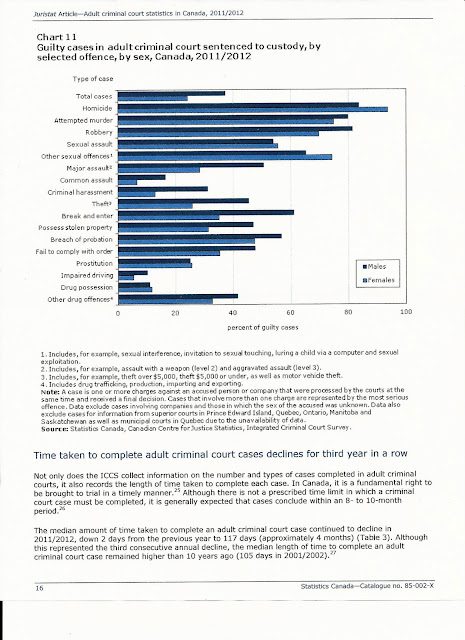 So the second graph is to do with the "guilties punitive stage" or Jail?. Homicide,Sexual assault, Other Sexual offences, prostitution ! Women all surpass men? yet they need only 6 jails while comparatively having 192 for men?  If this is only a graph out there for 2011/2012 just think of how many sexual offenders of the female variety are out there and yet no one would bat an eye at leaving their child with a Female "the nurturer" and would be totally creeped out by a male, say running a daycare. Finally I will just add this. In the previous graph , when it pertains to "impaired driving" Women surpass men in this field as well yet by over half men are sentenced to prison. Why, is the over 1 ton vehicle they are driving impaired less dangerous? Do women respond better under the influence? Do they somehow suffer in an unseen way more then men and therefore less responsible for a crime?
Time to wake up!

Please click on each Graph and they can be blown up. each graph and related material can be found on the link first supplied. What is your interpretation considering we are taught and raised to believe that only MEN commit acts of violence, Men are drunks, drink and drive? Men are the burglars or those that commit break and enters. Men are violent, etc. You get the point?
Why in Canada is there only 6 prisons for women and 192 for men?
The difference between criminal acts and sentenced is the reason for the two graphs. All of those numbered were found guilty, yet gender wise the sentence seems different. We are to believe that Gender is not an issue in court.

How far does the rabbit hole go?
A word from an insider that makes a living dealing with this gender bias in Canadian courts:
http://wheatkings.blogspot.ca/2015/08/lawrence-ben-eliezer-day-1.html