No one is interested in something you didn't do. (blog 47)

Where there is no easy solution to this I am attempting to show the transitions of testimony given by my accuser and where the courts should have been able to see through it (and they ultimately did in the end) I do believe that there is some serious negligence here as they should have been able to see through it long ago. Why did they not see? And finally now that they should clearly be able to, why do they still do nothing about it? The following is a transition from the original statement, to the testimony given at the pre trial and finally the testimony given at trial with additional supporting documents such as the DNA report and the weather report from the Canadian national weather bureau. 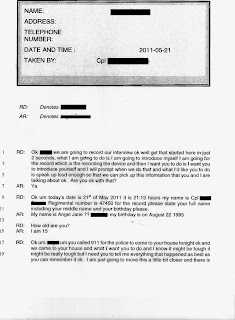 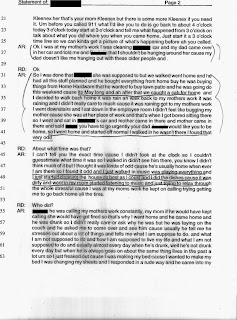 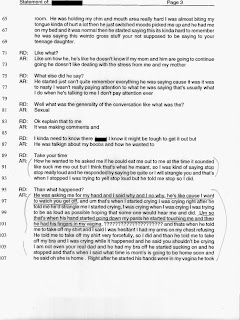 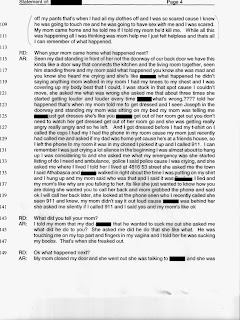 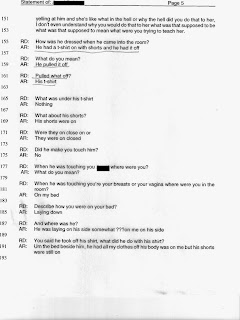 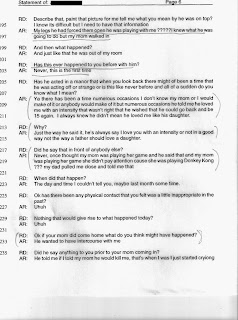 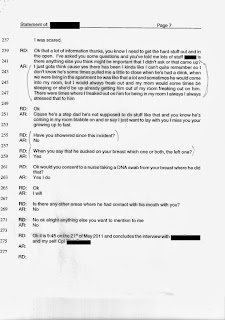 Clearly there is some issues here, issues that police should have picked up on if they were actually interested. 1. A young girl who had know only her father for over half of her life ,she accuses him of the ultimate. Question: do you sit down without your mother and talk to strange men about this in a interview room?. 2. Why was an under age child questioned without her mother? 3. Imperative all along was the fact that it didn't rain that day, not even a slight drizzle and the police that worked earlier that day knew this. 4. This is the same person to falsely accuse others by other members of that detachment, in fact excluding myself and the 2 others after myself at the time she falsely accused 11 people.
5. just to keep the list short, why so bloody chatty? its almost as if it were a script, there is zero apprehension and it seems as though she was talking to her best friend. Admittedly while under oath at the preliminary enquiry she states "I didn't say this" when offered time to reflect on her statement before testifying. 6. I was physically incapable of such violence as I was in a full back harness suffering a L5/S1 herniated disk having  medical reports done that very day about me while at the doctors that said "can't lift more than 20lbs, can't stand , sit or lie down for extended periods.", coupled with the fact that I had zero apprehension of giving up DNA.
7. There was zero, nothing even photo worthy of such a horrendous attack that would lend credibility, including the later accusations that I had choked her with both hands, while pinning her to the wall and removing her clothing, all of which would have left DNA, yet nothing.

These are the Pre trial transcripts, the blocked out names aren't meant to deceive but we are unsure of publicity bans, upon clarification the black out will be lifted.The trial transcripts have been paid for and are undergoing blackouts over names as well for the same reason.
TORTURED

Up front I will apologise  for my less then perfect attitude but i think that i am justified after all that has gone on. I've had to endure years of people saying all kinds of shit about myself, frankly as i sit here near vomiting as I try to write this Blog and to to convey feelings about all that has transpired.
I have thought about how to say this to the reader, pondered getting real deep and attacking this transcript line by line, version by version of my accuser and in fact now even police, and to point out the obvious...but no. Instead I'll just say this. If you are a first time reader, (thank you) I would go back a bit in the blog a bit and start off by reading "Acquitted" and then move on as this thing is 217 pages and when you first start to read it would appear that I'm quite a creep, its a long read but if you endure you'll see the corruption and for those of you that know me, you'll see the culmination of what I steadfastly have been claiming since day one.
There was a reason why I decided to go JUDGE AND JURY and that reason is very simple. I was getting screwed and the judges were letting it happen as well as those of the government. My attorney's all said your nuts to not go JUDGE alone! you'll get slaughtered! Well, in my humble opinion I figured the exact opposite. The JURY added witnesses and ones that were not corrupt. JUDGE alone, they would have excused her lies, endured her bullshit and i believe that they would have found me guilty Even after being cleared by DNA!. In the end, they screwed me over, the JURY (my witnesses) having heard it all were excused and i was forced into re electing to judge alone so that I may receive an acquittal.!
I believe that everything I said happened in court did in fact happen and the transcripts are accurate. ALL but one! It would appear that I have a photographic memory and this I know. A certain police officer who collected the evidence and photo's "of the crime scene", They have fudged what was asked by my attorney, and what the witnesses responses were. I know that I was accurate on all points and I know that all the testimony I heard, reports read, 2.0 versions read, that I didn't simply sit in the prisoners box and completely make up the testimony of the evidence cop. I'm not going to get long winded, so I'll just say it. "we destroyed all the evidence", was the evidence ever turned over to the crown? "no!". These people's human souls are fucking dog shit! They of coarse WILL NEVER allow those statements to come out as it would damage the very institution of justice and overwhelmingly prove culpability on behave of the crown for malicious prosecution.Overwhelmingly,every newspaper would have that on the front page this AM and they are not going to let that happen either, leaving nothing to chance they placed a publicity ban to which we are still wondering if that still holds.
SO since i got screwed out of my jury trial, straight up acquittal without additional bullshit thoughts by the judge. I ask YOU to DELIBERATE, I ASK YOU TO READ THE DNA RESULTS, THE MULTI VERSIONS OF TESTIMONY STARTING FROM 1 to 2.0 AND HIGHER. READ ALL THE PRE TRIAL TRANSCRIPTS, TRIAL TRANSCRIPTS AND RENDER YOUR VERDICT.
So without further delay, " Ladies and gentleman hearken unto the kangaroo courts of Canada" 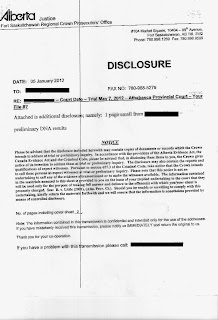 This is the DNA report for my fingernails, note in her on stand testimony that the police were there right away. also there is another DNA report from her breast swabs that they have not allowed me to have, that to cleared me three months into this and yet they continued.This is why my attorney says in his letter " once again your DNA has not been found in this matter" Also note that they have placed my DNA on the national data bank which they are not supposed to.My attorney read out the results of the other DNA test in the court of queens bench in Edmonton, that is exactly why i got bail, 5"000.00 no cash.
TORTURED 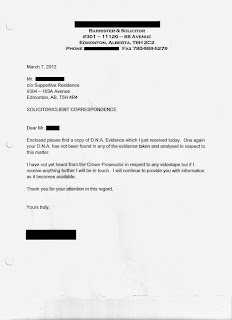 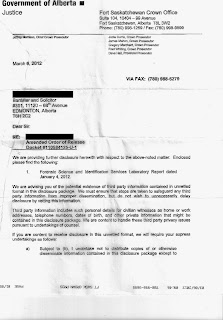 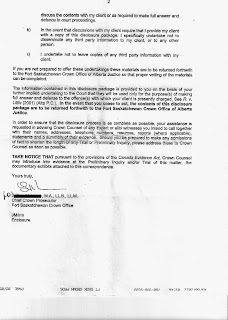 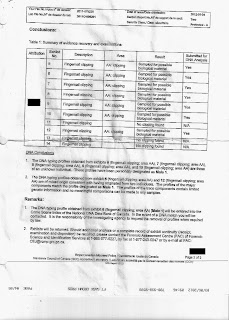 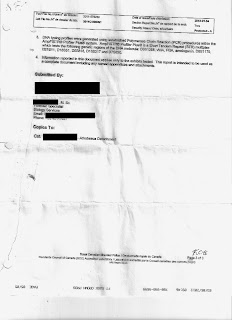 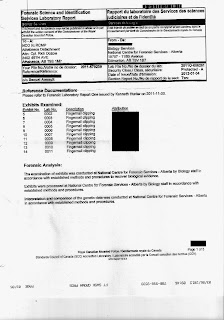 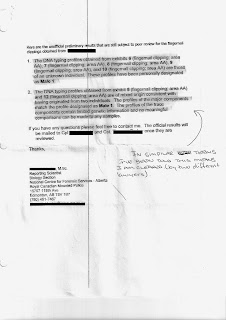 This is the weather report for the entire month of may from three different reporting stations. you will not in her original statement as well as in both Pre trials she said it rained....eventually when confronted with this report at court she admitted that it did in fact not rain.
you will notice that it has been updated and now says m for missing but i assure you i have the original paper version and it says that there was no rain...in fact there was only 4.6 mm for the entire month, and she admitted it didn't rain as well.
TORTURED
http://climate.weather.gc.ca/climateData/dailydata_e.html?timeframe=2&Prov=ALTA&StationID=47047&dlyRange=2008-06-05|2013-01-14&Year=2011&Month=5&Day=01 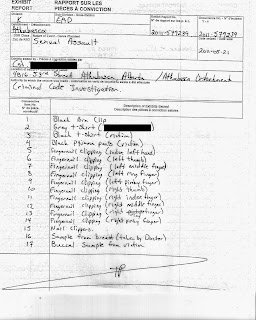 You can see all the evidence seized that day, where do the black jeans come from?The black jeans were brought up at Decembers Pre trial hearing and subsequently sloppily removed from the record. you heard me right,  I am accusing the courts of altering transcripts after all what pyjamas have a button, zipper,belt?This is why i say they were altered sloppily because they couldn't change the whole dialogue. she was asked  "what did you change into" and her answer was " a black pair of jeans" Hence the whole exchange about "zippers, belts and buttons", such as a pair of jeans would have and not pyjamas as are in the evidence seizure list . please refer to the Pre trial transcripts. Also the day in question you will see that she turned over a grey t shirt of mine , "he left it behind" and it was seized yet under oath she claims several times that i put it on and left her room. also her mother says she seen me fully clothed. and finally my accuser claims that I was about to have sexual intercourse with her when her mother walked into the house. And oh yeah, under oath the police claim that they destroyed all this evidence before there was even a trial!
TORTURED 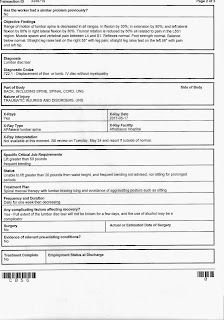 This is a copy of my medical file that proves I couldn't physically done what i was accused of. Police even make special note of my back condition"he was in excruciating pain due to a back injury" and I was in a full back harness, they took it off before arresting me.The last two page report was based on his 30 month work with me.Note that i couldn't lift more then 20 pounds, sit ,stand or lie down for any length of time. Incidentally this report was generated on may 21,2011 just hours before my arrest!
TORTURED 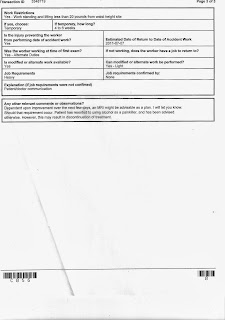 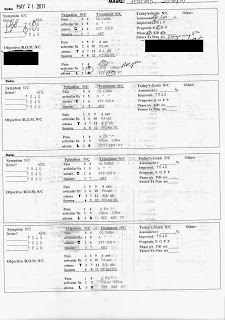 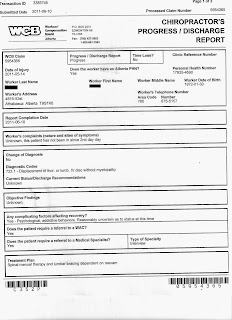 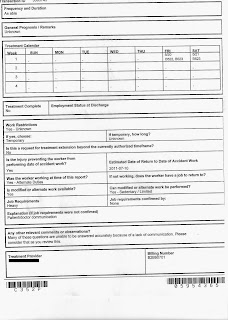 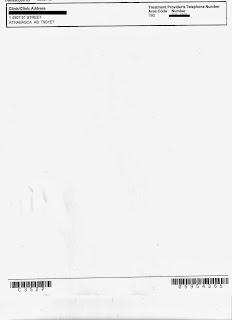 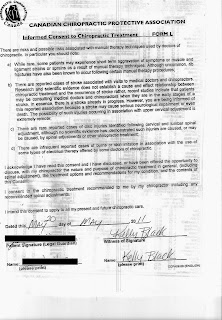 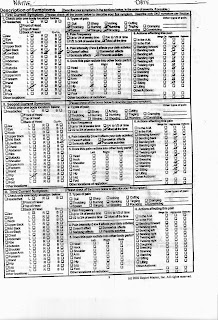 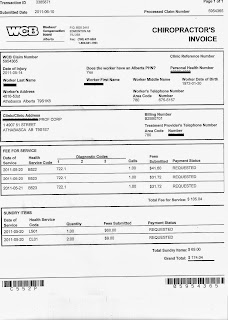 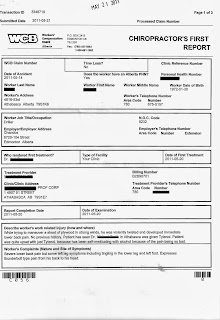 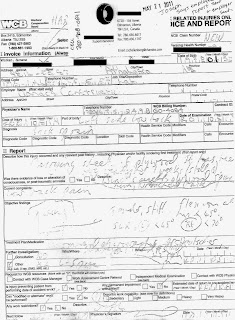